April A to Z blogging challenge 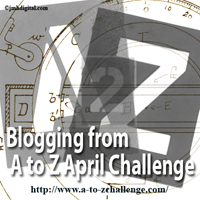 This weekend, I signed up for "Blogging from A to Z Challenge" for April -- a week away from the challenge's start and they had almost 1200 participants!

I did this in 2011 and I think there were only 400ish. Though I could be off in that number. But I'm glad the challenge is growing, it's a fun and creative idea that encourages bloggers to keep doing what they already do (blogging) and provides an easy framework to write within:

For every day of April (excepting Sundays), you write one blog post that starts with a letter of the alphabet. April 1 is A. April 2 is B. April 3 is C ... and so on.

I know some people treat it like a blog hop or campaigner challenge, trying to visit and follow every single blog on the list -- and if that's what you want to do, more power to you. But I'm really much more interested in it as a means of making myself write 26 blog posts in a month.

A few months back on Kelda Crich's blog, she got talking about choosing a theme for your A to Z challenge. I realized that a theme (and some pre-planning) might be what I need to make it through the whole month.

So in 2012 I'll be blogging A to Z about my favorite book series. Mostly science fiction and fantasy, but with some other genres thrown in. I have a plan for every letter already! Every letter except Y, that is.

Anyone got any Y book series ideas? I've gotten creative with other letters, sometimes using the series title, sometimes a book title, the author's name, or a prevalent element or character's name.
Posted by Unknown at 8:00 AM

Eileen Wiedbrauk is a writer, tech geek, designer, coffee addict, cat herder, public library advocate and employee, former editor and founder of World Weaver Press, MFA grad, Odyssey Workshop alum, web developer-in-training, kdrama devotee, avid reader, and a somewhat decent cook. She wears many hats, as the saying goes. Which is an odd saying in this case, as she rarely looks good in hats.
Hey! This is my old blog where I post links to my new blog, or you could just check out the new blog at eileenwiedbrauk.blog.